I want to share with you some of my favorite songs from his films.

Dil Ek Mandir  -“Yaad Na Jaaye”—– A family drama,Rajendra Kumar stars opposite Meena Kumari and Rajkumar. He plays a doctor whose former love played by Meena Kumari is married to Rajkumar who suffers from terminal illness.The film shows  the value of professional integrity and self-sacrifice.The song is sung by Mohammad Rafi and signifies the transience of time and one’s desire to hold it still.
Ayee Milan Ki Bela- “Main Pyar Ka Deewana” ——–It starred Rajendra Kumar, Saira Banu and Dharmendra (in a negative role).In  this song the hero is singing about his love  and admiration for nature .The song is sung by Mohammad Rafi and the beautiful score is done by Shankar Jaikishan.
Mere Mehboob—Tumse Izhare Haal Kar Baithe——In this film Rajendra Kumar makes a romantic pair with Sadhana,one of his most successful pairs ever.The song shows the pure and innocent love between two throbbing hearts,who  are shy to acknowledge their love.It is a delicate and sweet song sung by Mohammed Rafi in his intoxicating voice and music is by Naushad.

Arzoo “-Aye Phoolon Ki Rani”—- It stars Sadhana, Rajendra Kumar, and Feroz Khan in the lead roles,which was directed by Ramanand Sagar.It was a huge blockbuster of the 60’s. In this song the hero praises the beauty of his beloved by bestowing upon her titles such as queen of spring and flowers.He also showers her profusely with epithets, which makes any lady blush with pride.

Mera Pyaar Bhi Tu Hai – Saathi(1968)—-In this film Rajendra  stars opposite Vyjayanthimala.This film is an emotional melodrama showing the up and downs in the life of a married couple.The film also stars Simi Grewal in a supporting role.Sanjeev Kumar  also has a cameo in it.In this song,the couple asserts their unconditional love towards each other.The song is sung by Mukesh  and Suman Kalyanpur and the music  is by Naushad.

Suraj- “Kaise Samjhaoon Badi Na Samajh Ho”—- It is a fantasy film filled with romance and adventure.It again stars the hit pair of Rajendra Kumar and Vyjayanthimala. Mumtaz has a brief role in it as the companion of Vyjayanthimala.The song is a type of ‘jugalbandi’ between the two.The song is melodious and based upon classical music.

Anjaana(1969) – “Rimjhim Ke Geet Saawan Gaaye”—– It starred Rajendra Kumar opposite Babita Shivdasani.In this song he is stranded in rain with the heroine and finds shelter in a hut.They both sing a song to the tune of raindrops falling around.It is a melodious song sung by Mohd.Rafi & Lata Mangeshkar and the lyrics are by Anand Bakshi.

Aap Aaye Bahaar Aayi (1971) – “Pooche Jo Mujhse Koi” —– This film stars the lead pair of Rajendra Kumar and Sadhna after the success of Arzoo.It is a playful and  mischievous  song in which he teases the charming Sadhana and thus annoys her.He likens her features with the spring and other aspects of nature.It is a nice song sung by Mohd.Rafi and the beautiful lyrics are by Anand Bakshi.

Gora Aur Kala (1972) -“Ek Na Ek Din Yeh Kahani Banegi”—– It is a film with Rajendra Kumar in a  double role.He plays romantic lead opposite Hema Malini.It is a tale of two twin brothers,one of them is handsome while the other disfigured and ugly who are distanced by fate.In this song he escorts gorgeous Hema riding a horse .He promises the ‘dream girl’ to make her the ‘girl of his dreams’.It looks that he is adept at escorting beautiful ladies riding a horse as he also did the same in “Arzoo” .The melodious song is sung by Mohd.Rafi and the  music is by Shankar and Jaikishan.
These were some of my favorite songs filmed on Rajendra Kumar. BTW,which are your favorite songs Rajendra Kumar? 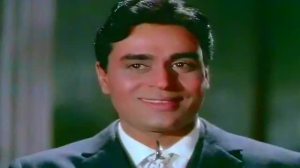